Around the World in Record Time 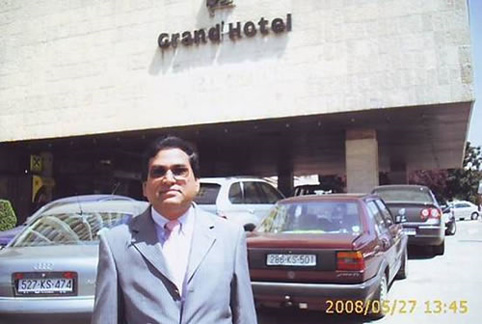 It took Kashi Samaddar nearly seven years and £350,000 to visit all 218 nations on Earth, setting the world record. Sadly, his photographs of such an achievement are a bit lack-luster.

The idea for the trip began in 2003 when Calcutta-born Mr Samaddar was left stranded in Johannesburg, South Africa for two days because of visa problems due to his nationality.

As an act of defiance, the businessman promised himself he would travel to all the countries in the world, using his life savings to do so.

According to Guinness World Records, any person attempting the trip must take public transport such as scheduled flights, buses, trains and ferries to arrive in countries.

The record-breaking authority also defines visiting a country as ‘setting foot within its border’.

It is not necessary to remain in any country for any length of time – perhaps this could go some way to explain Mr Samaddar’s opportunistic photos.

As a result of his trip, the Indian national has set up the Travel, Tourism and Peace Initiative, which provides travellers with advice on what documentation they need to enter different countries.

The Daily Mail | Via Neatorama